Being Strategic in a Month-to-Month, Quarter-to-Quarter World

Moira Vetter, CEO & Founder of Modo Modo Agency, has been doing marketing for 30 years and currently leads marketing strategy for her clients at Modo Modo Agency. In this video, Moira emphasizes that in today’s marketing landscape, you must be both strategic and fast. Strategy and research used to be done over months and quarters. But today, consumers and executives expect immediate action—whether it’s strategic or not. Moira will discuss the differences between companies reacting with campaigns for immediate clicks and those moving quickly to test strategies in market.

This video is interactive! You can comment on Moira’s content, ask questions and show your enthusiasm for the presentation with the emojis on the right. Click “Join the Conversation”! 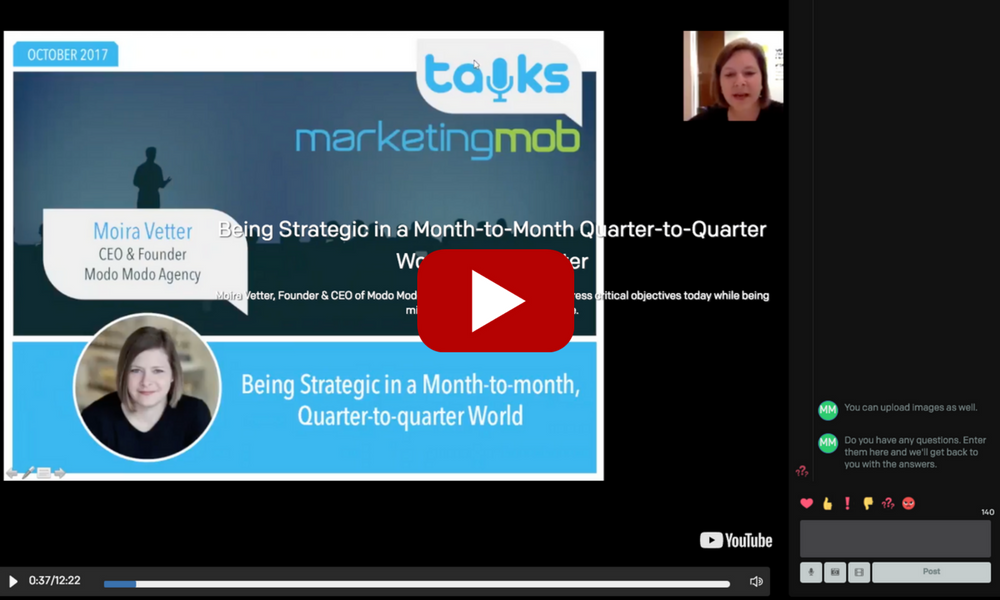 Being Strategic in a Month-to-Month, Quarter-to-Quarter World – By Moira Vetter, CEO & Founder of Modo Modo Agency

Moira: Hi there everyone.

Thanks so much for joining us this afternoon.

So, I thought that the topic of being strategic in a month-to-month, quarter-to-quarter world was very relevant.

Being in the agency world, we’re seeing this time pressure and this immediacy really taking root and often negatively impacting a company’s ability to be strategic.

So I’m going to talk about what does that mean to be strategic first and foremost?

So, in our mind when we’re working with someone who is trying to be strategic from a marketing standpoint, we regard being forward-looking.

Are the programs you’re putting together, will you be able to respond to the market with them? Are they flexible or adaptable?

That could be to market, to product, to different things.

Are they repeatable and exponential?

And I loved this image because it’s sort of speaks to this notion, often we’ll have clients that want to do an engagement and if you devise a marketing program that is so fixed or rigid as a square would be in this image, you know you often can’t pivot.

You can’t use insight that you’ve gleaned in the process and sort of adjust.

Whereas, if you’re working with a program that’s round in nature, you can pivot.

It can move. It can pick up steam. It can take on a life of its own.

It can create exponential value on its own. So that’s what we think of when we think of strategic marketing.

The best thing to do when you’re in this sort of, you know, crazy reality of this month-to-month world is breaking long-term goals into short-term projects.

So often we’ll have people engage the firm that have a short-term project that an executive has asked them to take on.

And if instead you can sort of understand what was the Nexus?

What was behind the need for this short-term project?

And sort of boil that up into a broader, longer objective that you’re trying to accomplish.

You know you can be much more strategic.

And we always think about how do you eat an elephant?

One bite at a time. If you know that you’re building towards an elephant.

If you can take the time to speak to your executives or your team or your customers and understand what an ideal end state would be that’s fully strategic, then you can actually break up smaller projects and sort of cull them together into a picture of a broader bigger vision.

But if you don’t know what you’re building towards. You’re just reacting and gorging yourself.

And so often we will have engagements with clients where there may be some projects that are responsive in nature, but if you can understand a bigger, long-term goal, you can hone your activities towards a longer-term stretch goal.

And I appologize. This is painful on the eyes, but this is not unlike the kinds of work plans that we would use with clients.

You know, what’s important again is this notion of planning for the long-term despite the immediate pressure.

And so you’ll see in the top here this phase one area right? Give them a Band-Aid, but don’t stop there.

Very often when you’re in the marketing realm, and let’s say there is a pressure that’s on you.

There’s a short-term sales objective. This quarter’s numbers must be higher. Or we’re going to a particular show and we must have sales activity up in this period.

People will craft an engagement or a set of activities around this very limited place in the world. This sort of phase one activity.

And what we try to always understand is, what is that? What’s the lowest common denominator in the Band-Aid? But not stop there.

So we’ll give you your band-aid, and we will work on that short-term project, but we will only do that in the context of also simultaneously working on the longer term plan.

So in this case, you can agree to short-term gains and KPIs and you can create with minimal effort a short term objective.

But all the while you are also doing a short or long term or short and long-term plan that ideally includes some customer research to inform it and has a long term plan about it, a multi-quarter plan.

And then ideally, the next phase would be creating a flexible system, so I talked about that before with the ball.

Something that can pivot.

Something that can move with you.

So rather than just creating a few things or a few programs, you create a system of things that you can sort of tweak or move differently to allow you to respond to different audience triggers.

You know different degrees of content perhaps different places that someone might be in the sales funnel.

You know that requires a different amount of information, or would enable you to test different variables.

And then the in market launch and test. Launching and testing in the market, I think that that testing is always this great idea.

Everybody says they want to do it. Some people do A/B testing with paid search.

But still testing is something that is often a, it would be nice to have but doesn’t actually get implemented in the real world right?

So, we really encourage our clients to try to find the variable that they can test in market, and then ultimately refine, tweak, and retest that.

And you know the last note I have on here is stop starting from scratch.

Build on what you know because starting over costs time and money.

If you don’t have time in the first place definitely construct a program that enables you to you know think and respond and shift from your core effort.

And then you know over time you can make it smarter.

You can make it better you can enhance and often in terms of the money aspect of things, you know you can reduce waste in the effort.

Often, we’ll have clients that you know sort of move forward and sort of throw out a whole effort.

If you can again build those building blocks to be flexible and malleable you will not have to wholesale throughout and effort based on a new variable.

And again in keeping with the time that we have today, you know this this is I think my last slide.

It’s, don’t stop what you’re doing unless you’ve given it enough time to work. And this is really critical.

We have a lot of executives that will pull the plug on something particularly if they have a short-term pressure, you know, or maybe it’s something pressure coming down from the executive suite. And you know we must have X deliverable X response X conversion or we’re going to pull the plug on a particular program.

And it’s important to know what mediums can react and in what time before you start pulling the plug.

So, you know one of the things that we like to look at is, how quickly can you expect different media to respond? And so for example here we’ve got social media.

You can know in hours, or days usually in hours if something that you’re doing in the social media arena is really working effectively or working against you.

In terms of paid search and SEO that could be days to weeks you need a little bit of a trend line, but you can see a trend coming inside as quickly and you can tweak it.

You know digital ads and direct that can take longer it depends on how many people you’re contacting, how many places you’re placing it.

But especially if you’re in a business that is really working on the long term.

And the long term positioning of the business where you’re doing thought leadership and brand positioning you need to give those things time to work.

Changing your position as the leader in a segment isn’t something that’s going to happen in the first couple weeks that you launch a campaign.

It takes time to kind of you know take hold and so it’s important to kind of reinforce with executives what they can expect different mediums to do because I think that often there’s a reaction of you know we will give all things X period of time to do their job instead of, these types of activities should be given X amount of time, and these need to be given time to really sink in with people.

And in the same way these are happening on sort of a different time spectrum.

There’s going to be entirely different measures that you use to you know to read your effectiveness and the kind of traction that you’re getting.

So, obviously whether your brand has been repositioned, the kinds of things that you’ll do to assess something like that to see if you’re strategically moving your business where it needs to be is going to be something very different than, you know, how many followers you have on a Facebook page.

Or if you’re getting enough engagement with some blog posts or something.

So you know in the same way you need to be realistic about what you can expect of the medium.

You need to be very thoughtful about what the measures are that you’re going to be using. And I definitely think and this is you know I think Annelle you mentioned you’ve been in your industry for 20 years now.

I’ve been in the market close to 30 years. I’ve never met anyone that didn’t want a long-term result in a short-term window.

And I think that to the extent that we can all be cognizant of that and try to deliver the short-term need with the long-term focus, you really can position yourself in a win-win spot.

If you can understand that you need to get the quickest wins possible, but with the longest-term goals in mind.

Or with you…you know with having an understanding of what it may take to get the company over the long haul where it’s going.

You really can position yourself well.

So again, condition executives to understand what they can expect and win.

And that’s everything I have to say at least today in 15 minutes on being strategic in a month-to-month, minute-to-minute world.

You have successfully subscribed to Marketing Mob! 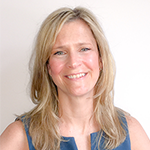